So what is the difference between the above two terms? These two terms are often confused and there are many people with different opinions on their meaning but in simple terms what do they mean and why are they so important on our pathway to net-zero?

Energy Conservation is defined by the Collins dictionary as “the prevention of the wasteful use of energy, especially in order to ensure its continuing availability”

Put simply it is a deliberate effort to use less energy or none at all – this can be through designing out the need for energy consumption, changing behaviors to reduce energy consumption, or streamlining processes in business or our everyday lives to reduce the amount of energy we use. Examples of these include:

Energy Efficiency is defined by the Collins dictionary as “a measure of how efficiently an appliance, building, organization or country uses energy”

Put simply this is the using of less energy to perform the same task or function. It’s general equation is:

This is generally done through the application of technology. Examples include:

The trouble with a focus on Energy Efficiency alone is it can mislead people into making poor choices trying to do the right thing – for example, if you were to attempt to be energy efficient by installing a heat pump at home without taking any Energy Conservation measures you may find you actually use more energy to do the same job- how could this be you say? Well, it’s simple maths:

If Energy Conservation measures had been taken such as insulating the house, upgrading windows, doors, upgrading the heat transfer equipment such as radiators to increase surface area, etc then the heat pump could operate at 35 deg C and potentially have an efficiency of 300% or more meaning this may be a good option. Now, the carbon story is different but we won’t get into that here.

Why are Energy Conservation & Energy Efficiency so important on our pathway to net zero?

Load shrinking – The IEA terms Energy Efficiency the first fuel. Globally, energy efficiency improved by an estimated 13% between 2000 and 2017. Without this improvement, global energy use in 2017 would have been 12% higher – equivalent to adding the annual final energy use of the European Union to the global energy market. Without these improvements our task to get to net zero may be more difficult as the rate of pace of installation of renewables may not keep pace with economic growth. 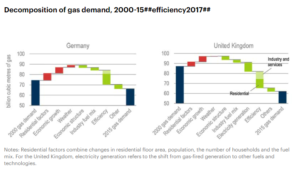 Energy Security – Energy Efficiency & Conservation have benefits for energy security also – By reducing overall energy demand, efficiency can reduce reliance on imports of oil, gas and coal. In the graphs above sourced from the IEA we can see the impact of efficiency on the gas demand in the UK & Germany compared with electricity generation changes.

Economics – Energy Conservation can be free in many cases and certainly can be low cost in the majority of cases. Energy Efficiency also generally pays for itself with typical paybacks between 1 – 5 years for many energy efficiency measures. These numbers are based on my own experience working in the area for years. This compares with c.8 – 10 years payback for renewable technologies in many business cases here in Ireland.

There are so many benefits to Energy Efficiency – you can find out more here.

In 2019 the IEA released their Energy Outlook report. In that report there was a graph that really caught my attention: 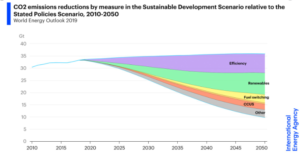 The graph above demonstrates where the emissions reductions need to come from to meet the IEA’s Sustainable Development Scenario. The IEA’s Sustainable Development Scenario (SDS) sets out a transformation of the global energy system, showing how the world can change its ways to deliver on the three main energy-related SDGs simultaneously. The SDS is aligned with the Paris agreement – The SDS keeps temperature rise to below 1.8 °C with a 66% probability without reliance on global net-negative CO2 emissions; this is equivalent to limiting the temperature rise to 1.65 °C with a 50% probability. More information here: IEA SDS

What is so striking about this graph is the contribution efficiency must play in this scenario and that this scenario goes nowhere near achieving net zero by 2050. Our current policies align with the top of the graph – although recent commitments from the USA & China will support an improvement on this trajectory. The world needs to start focusing on Energy Efficiency & Energy Conservation – there is no significant expense, the technology and know how is available and it offers a way to save money and reduce the overall requirement for more expensive measures such as renewable energy & alternative fuels. By not maximizing the benefits of Energy Efficiency & Conservation we are simply making decarbonization more difficult and expensive. Any good Climate Action Strategy will include these measures.

At Climeaction we work with organizations of all scales to develop practical Climate Action Strategies.

Our strategies rely on Energy Conservation & Energy Efficiency as the first steps in any of those plans. Why? They make practical business sense and improve the payback of the strategy while reducing ongoing costs and insulate the organization against fuel costs increases. Our strategies take a full picture approach, reducing emissions, costs, building capacity & providing long term social & environmental sustainability impacts. 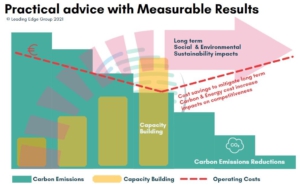 Made in Vietnam
Scroll to top